The clouds slowly parted creating an opening for an immense shaft of cathedral light descending to the earth yet spotlighting nothing in particular so much as everything around it.

Remarkably a second similar opening gradually appeared in the clouds nearby, and then… a third. 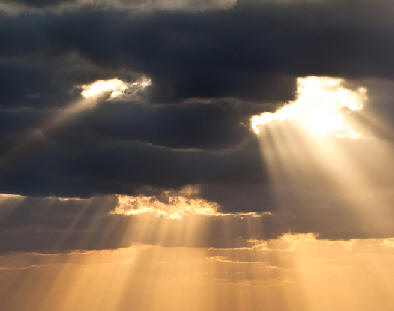 These three enormous heavenly shafts of light might have been one of the more remarkable sights ever seen had not something absolutely spectacular happened next to, so thoroughly, surpass it...

...A solitary winged figure, that looked for all the world exactly like an angel, emerged flying through one of the openings and soared slowly and evenly around the sky moving, like a hang glider, in great fluid winding arcs.  Then, from the other opening, another figure appeared, and then, from all three portals, another and another and another.  All three openings began issuing forth angel after angel until heavenly hosts literally poured from the sky.  It was astonishing.

Some soared around, like the first, and others dove, quickly toward the earth with wings tucked straight back.  Some, apparently relishing the experience, arced, and rolled, and spiralled in apparent aerobatic revelry.

More and more winged creatures spilled from the sky many of them hovering just above the earth scaring up clouds of debris with great powerful flaps of their wings while surveying a suitable landing site.  The sky, too, was a whirlwind of activity with winged forms fluttering like a rhapsody of windswept leaves as hundreds, then thousands, of angels descended and began to alight, at various levels, on trees, on rocks, on the ground and on the mountainsides roundabout.

It took some time for all of them to land and, as they did, it became apparent that they all shared a certain similarity of countenance.  They all looked around with expressions of such exquisite appreciation on their faces that these might have been their very first, or their very last, moments on earth… or both.

Then, they looked at each other, now with faces softly shining and, from somewhere, one of them began to sing.

It was an overture… like the wind tugging gently at your sleeve… a singly beautiful alto voice breaking the stillness and slowly rising.  Then a soprano took over, lilting rhapsodically from one note to another and riding an arpeggio upward to hold a single note so high as to be nearly inaudible, and so long as to make time stand still.  Suddenly baritone voices thundered in with hearty bravado and tenor voices robustly rollicked forth a lyrical melody.

Higher feminine voices rejoined them occasionally taking over when, from somewhere underneath, low basso rumblings stirred deeply buried reverberant undercurrents within each and every chest and abdomen.  The entire celestial chorus rose again, then fell and swelled, and rolled, and pumped from mighty angelic hearts for hours and hours on end.  At one point the singing seemed to fade into the background and become the very voice of God speaking directly, clearly, strongly, and knowingly expressing unspeakable love and total integration with… everything.  In a moment it expressed the universe in a single molecule of air.

The singing crescendoed in bombastic aplomb.  Such gratitude, such majesty, such unspeakable love… so beyond words.

As time passed the sun set slowly and irrevocably, like the turning of a great and momentous wheel. The crimson-orange skyline and the exquisite angelic vocalizations matched each other perfectly, slowly and sublimely subduing in reciprocal beauty.  Precisely at the moment darkness fell, so fell the music… wholly and completely …silent.

Still there was room for dessert.

BOOM!  The fireworks began… Like visual champagne it sparkled and popped on optic taste buds.. feeling, for all the world, like the very embodiment of pure celebration as intense as the very best of life.  BOOM!  BAWOM!  POW!  It was a cacophony, a celestial flurry of fiery orgasms forehead felt yet visually gathered from the canvas of cool black sky.  The furious visual symphony continued for the better part of an hour… then…

Not the Bible: The Good Book